Three of My Books/Boxed Sets Are on Sale for Only $0.99, Perfect for Your Cyber Monday Shopping!

Shade and the Skinwalkers (Book #2 in My YA Paranormal Mystery/YA Urban Fantasy Series) Is Only $0.99 Through Cyber Monday. (Next Day, the Price Goes Up to $3.99.) 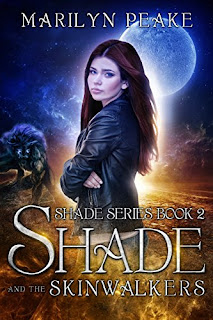 CYBER MONDAY SALE:
Last day to grab Shade and the Skinwalkers, Book #2 in my YA Paranormal Mystery/YA Urban Fantasy series, for only $0.99! (Next day, the price goes up to $3.99.)

As if being a ghost whisperer in a trailer park isn’t weird enough, skinwalkers take things to a whole new level of strange.

Running away from her demons rather than facing them, Shade’s mother moves them once again to a new place—this time a trailer park on the outskirts of Roswell, New Mexico. Hiding in plain sight among UFO festivals and rumors of alien abductions, paranormal creatures live there by their own rules.

Shade accepts her destiny as a ghost whisperer with the help of her new best friend, Kai Zahnii. An empath and healer with the potential to become a Navajo shaman, Kai must break free of her dysfunctional family. This dysfunction goes far beyond anything Shade has ever known. Kai is all too familiar with skinwalkers, shapeshifter witches who violate taboos in order to practice pure evil. In the Wild West atmosphere of her new town, Shade is thrown into a world inhabited not only by ghosts, but also by witches, faeries and shapeshifters. She must find the courage to fight the skinwalkers alongside her new best friend and creatures she never knew existed.

Shade (Book #1 in My YA Paranormal Mystery/YA Urban Fantasy Series) Has Been Reduced in Price to Only $0.99. 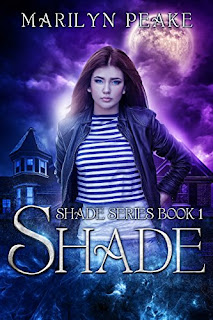 Thanks to her offbeat mother, Shade’s full name is Galactic Shade Griffin. Having a name like that while being the new girl in school is pretty much catnip for bullies. The summer before Shade’s junior year of high school, her mother breaks up with yet another boyfriend and moves them once again to a new town.

This time, they move into a dilapidated old house where Shade has an entire attic bedroom to herself—at least until she discovers it’s haunted by the ghost of a teenaged boy named Brandon Yates. When Shade’s best friend goes missing, her life becomes even more complicated. With the help of Brandon who’s struggling with his own issues in the world beyond, Shade faces the question of whether or not she has what it takes to become a true hero.

Although this novel deals with a number of serious issues—drug and alcohol abuse, cutting, and disturbing world events—it's primarily a novel about a teenaged girl finding out who she really is and that she's capable of so much more than she ever thought possible.

Shade is a YA Paranormal Mystery/YA Urban Fantasy novel.

From Aditi Saha, Goodreads Reviewer: "All-in-all, [SHADE]'s a very entertaining book, not a single dull moment. Hats off to the author for writing such an amazingly cool teenage mystery novel with a paranormal twist."

From Lucinda Fountain, Goodreads Reviewer: "As beautiful as the eye-catching cover 'Shade' is a sensational, awesome story of unforgettable premise and remarkable depth of mind-blowing epicness! Fans of YA fiction will be dazzled by this debut."

From Rachel Dove, Amazon Author and Reviewer: "This book is enthralling, very easy to read and relate to, and discusses issues without patronising the reader. Brilliant, another gem in Marilyn's crown."

The Dark Legends Boxed Set Is Only $0.99 During Pre-order. 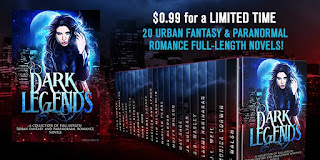 Marilyn Peake Author
AUTHOR BIO: USA TODAY Bestselling Author Marilyn Peake writes in a variety of genres, mostly Science Fiction and Fantasy. She’s one of the contributing authors in Book: The Sequel, published by The Perseus Books Group, with one of her entries included in serialization at The Daily Beast. In addition, Marilyn has served as Editor for a number of anthologies. Her short stories have been published in seven anthologies and on the literary blog, Glass Cases. AWARDS: Silver Award, two Honorable Mentions and eight Finalist placements in the ForeWord Magazine Book of the Year Awards, two Winner and two Finalist placements in the EPPIE Awards, Winner of the Dream Realm Awards, Finalist placement in the 2015 National Indie Excellence Book Awards, and Winner of “Best Horror” in the eFestival of Words Best of the Independent eBook Awards.